Lessons from my teachers …

I fly to Sydney tomorrow to work with ACAPTA on their big, bold Flashpoint Forum. ACAPTA’s dynamic CEO is leading change and a new way of meeting together. ACAPTA is the peak body group for a group of people who make up the Circus & Physical Theatre field.

We have 3 days together to meet, have conversations, eat, perform and leave working together in new ways. As I imagine myself opening space on Thursday morning, it makes sense to reflect (and share) some of thinking has has gone into the deign of this gathering. All of it comes from my teachers – who happen to be friends and colleagues …

On Open Space
At this year’s Show Me The Change Conference, Chris Corrigan opened space. The next day I asked him to sketch out his thoughts about Opening Space and I re discovered this in my red notebook (re created on Skitch) … 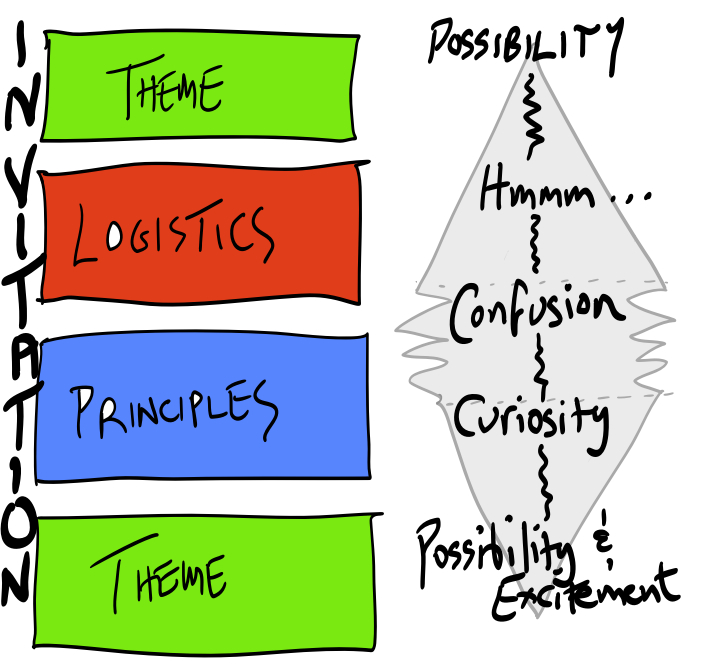 This diagram sets out the basic order of opening space … from the orientation to the Theme – to logistics – to Open Space principles – & back to the theme.

Running alongside these is the experiential journey of participants … from Possibility – to ‘Hmmm’ – to Confusion – Curiosity – & then Possibility with a twist of Excitement. I like this as it appears to use Sam Kaner’s Groan Zone Model (The Diamond of Participatory Decision Making).

Importantly is the language that Chris uses … “Remember, it’s an INVITATION”. We don’t ‘tell people’ what to do, instead ‘we invite you to …’. When opening space we ask questions like ‘So, how are we going to do this?’. And importantly at the end ‘you gotta finish it, with a crisp ending’. Chris used the term “Terminal Shutting Up”.

More on Open Space and other thinking…

This time some recent blog posts by Viv McWaters and Johnnie Moore caught my attention. Here is some other thinking I plan to bring to Sydney …

1. Bring some thinking skills to the group in relation to ‘suspending judgement’ and ‘deep listening’ – do this through play and Improv

Viv is reading Dialogue: The Art of Thinking Together by William Isaacs.

“I’m only part way into it but am already excited about the potential of relearning dialogue, which is about exploring the nature of choice. Isaacs describes dialogue as “a conversation in which people think together in relationship”. Any conversation can turn on our choices. If we choose to suspend and listen without resistance we are on the road to dialogue; if we choose to defend our ideas, we are on the road to either skillful conversation or controlled discussion. Skillful conversation relies on analysis and reasoning, controlled discussion on advocacy and abstractions.”

2. I’ll be humble and brave

Again, Viv reflects here on some facilitation fundmentals and there are 2 I will actively pay attention to

Bravery
Taking risks, disrupting patterns of thinking or behaving requires strength, especially when it goes against the norms of meetings, the expectations of clients and participants, and the urge to conform and be safe. It requires bravery to break the rules and change the game.”

A few things I will loan for Sydney’s Open Space …

*Explain how to have a bad time in open space

Johnnie explains it like this: “You can have a bad time in open space by waiting for someone else to post a topic that you are itching to discuss; you can go to sessions and be bored, staying there getting more and more frustrated; and you can come to me at the end and tell me that open space doesn’t work, or that other people need to be better prepared, or that you wanted something that you didn’t get.” Or any variation on that theme.

*Discourage colonisation of topics! Better to have a number of different discussions on the same topic

*Avoid the Questions, shut-up and sit down … get on with it

4. Take a stand for their work and not your own process

Chris offers some great insights here on ‘What it take to change an operating system‘. The one I’ll remember is this one because I have made loads of assumptions about the group I’ll be working with!

“If you don’t get it right the first time, don’t fight it. Learn from mistakes. If you get a world cafe set up and the group rebels, take a stand for the work, not the process. The worst kind of facilitators are those who let their attachment to process stand in the way of good work getting done. Instead of forcing yourself on people who “just don’t get it” get out of the way and help them do the work that they are hungry to do.”

The work in Sydney is all about shifting systems and ways of working together. I will be challenging and it’s the beginning of a process. Thank’s Chris for tuning me into these insights …

“The fundamental question is not why or what or who, but HOW. How can we deliver services differently? How do we change to include more public voice in our work without losing our mandate? How do we cope with the scale of change, chaos, interconnection and complexity that is upon us? These questions are powerful because they invite a fundamental shift in how things are done.”

The “How” question is one I’ll be asking in Sydney.

“New systems cannot be born with old systems without power struggle. As old ways of dong things die, new ways of doing things arise to take their place. But there isn’t a linear progression between the death of one system and the birth of the new: the new arises within the old. Transformation happens when the new system uses the old to get things done and then stands up to hold work when the old system dies. While old systems are dying, they cling to the outdated ways of doing things, and as long as old systems continue to control the resources and positions of power and privilege, transformation takes place within a struggle between the new and the old. Ignoring power is naive.”

And I’ll be running an activity that Chris and I used in Melbourne earlier this year to bring this insight to life. It draws on a Called Lifecycle of Emergence, it is explained and drawn here by Dave Pollard.

Mere reorganisation is not enough

“Its just clear to me now that holding a new conversation in a different way with the same people is not itself enough for transformation to occur. That alone is not innovation.” Chris Corrigan

6. And finally from Johnnie and Chris a very useful reminder about being a facilitator …

“There’s some paradoxical contract at the heart of facilitation where we talk about empowering the group but nevertheless are getting paid to bear responsibility for what happens. Sometimes that’s a engaging paradox, and sometimes it just hurts to sit there feeling real or imagined pressure to “do something” when doing nothing feels like the right thing to do.

The other day a delegate from an open space asked me, quite politely, how I justify my role. I think he was struggling with the sense that I wasn’t doing much a lot of the time. There are various possible answers to his question. One of them is that I’m sometimes paid to occupy a position of leadership and then not lead. Chris says this about part of his meeting:

“They are doing their own work and even though I didn’t technically “facilitate” anything today, I held space. Sometimes to wisdom not to intervene is what is required to keep space open.”