From Coast to Coast

We have lived outdoors under sun, moon and stars for over 4 months and I’ve lost track of how many sunrises and sunsets we’ve witnessed. Now we are travelling south, down the east coast, where the sun rises from the ocean and sinks behind the Great Diving Range. The difference feels disorientating after spending so long in the west. 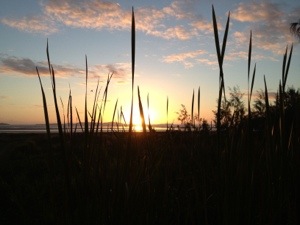 I watched the sunrise at Kinka Beach this morning – just south of Yeppoon and touch north of Tropic of Capricorn (approx 23° South … the southern most latitude where the sun can be directly overhead). On the west coast we crossed the same line at (about) Waroora Station, just south of Coral Bay. This Capricorn campsite on the southern tip of Maggie’s Beach was our favourite. We have camped at many locations, but at Maggie’s we were alone and everything about it was wild and alive.

Our hearts, thoughts and vehicle are heading home – Aireys Inlet at 38° south. Awaiting our arrival home are friends, family, our 2 dogs and colder marine waters. But first we have a few east coast pleasures to indulge in. Tomorrow we sail out to Heron Island for a (well earned) 4 day break from the trailer and canvas tent walls. Then 4 days mooching around Seventeen Seventy before heading further south in Noosa for point breaks and outrageously great gelati! Until finally we camp for a week in Scott’s Head – the NSW seaside town where our year of travel began.

Unlike the constantly changing itinerary of the last 4 months, I’ll bet a Noosa Gelato that we stick precisely to the east coast plan above!