My 8 year old son is learning guitar. After a few months of rote-learning standard riffs and chords, he is beginning to experiment with his own tunes and chords. “Daddy,” he says as he fingers an improbable combination of notes. “Is this a real chord? It sounds kind of cool.”

On balance, he spends as much time creating his own sounds as he does practicing the songs and scales his guitar teacher provides him. Both types of practice are important and both help to wire his developing his brain differently.

In this TED Talk by brain surgeon Charles Limb, he reveals something about the way the brain wires & fires when playing music. He also points out that his research reveals new questions about the neural process that underpins creativity and improvisation – more questions than answers at this stage!

His subject were jazz musicians and they were placed in a functional MRI machine and their brain was monitored to reveal real-time, neural activity. The results were interesting, but first a quick look at the pre frontal cortex.

The pre frontal cortex is the integrative part of our brain. This amazing area hosts functions such as self reflection, working memory and introspection. Physically, the pre frontal cortex connects (via neural synapses) with many other parts of brain including other parts of the higher level cortex, limbic brain (aka Mammalian Brain) and brain stem (aka Lizard Brain). It helps to integrate the divergent parts of the neural system into a convergent whole. Beyond that, the pre frontal allows us to be aware of our own thoughts and empathize and connect in a relationship with others.

Back to the research finding on musicians …

When improvising, large areas of the pre-frontal cortex associated with ‘self monitoring’ switch off. Smaller ‘auto-biographical’ areas of the medial pre frontal cortex turn on. Charles suggests that this may allow us to to reduce inhibition and increase our willingness to make mistakes. New generative impulses are allowed to flourish and we do not self censor. Improvisors out there will know exactly what I’m talking about!

I have been rediscovering my love of neurological science and the wonders of the human brain. I used to be an Occupational Therapist and worked with people who had suffered from stroke and acquired brain injury. There will be more to follow on this blog about the Integrative capacity of our brain. This also provides a useful metaphor for organizational life.

And finally, I’ll be gently encouraging my 8 year old to learn his scales by heart. And, I’ll be creating the conditions for him to Let-go of judgement, create his own chords and improvise! 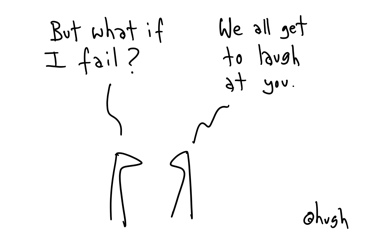