Just realised I have passed my double century of blog posts! Here’s my 201st post featuring 3 cartoons that happen to be sitting side by side on my desktop. These cartoons are also very linked by the people around them and concepts they explore.

The first features “The Slips” (and that’s me in 3rd slip). The Slips is an international consortium of blogger and facilitators. Many of my 200 posts have featured links back to the blogs of Anne Patillio (wicket keeper), Viv McWaters (1st slip), Johnnie Moore (2nd slip) and Chris Corrigan (4th slip). Thanks to Simon Kneebone for the artwork!

The next 2 are linked around the theme of status and power. This second cartoon is from the stables of Hugh McLeod over at Gaping Void. I just love Hugh’s ability to cut through and be totally honest and blunt! As part of the The Slips, I am constantly working with the Improv principle of Yes!And – which also inspired the name and theme of my blog. When new ideas and new ways of doing things are proposed in workshops, Yes!But … can often be heard as the automatic response. And if you don’t hear it, watch and you’ll see it in the body langauge! 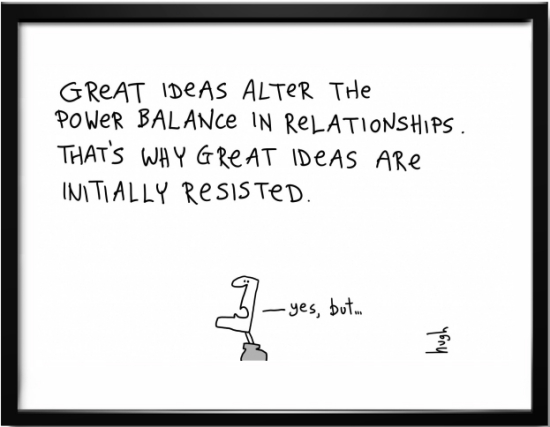 The last one again comes from Simon Kneebone and was drawn at the recent Show Me The Change conference. The design team for this gig happened to be The Slips (told you these pictures were linked!) and we embraced the principles of self organisation and emergence in it’s design. The other concept we brought was the notion of Keynote Listeners and Participants rather than Keynote (Expert) Speakers.