From an individual problem to a group solution

Posted by  GeoffBrown —November 14, 2011
Filed in Being Present, Just observations

Last week’s karate session was a master-class in more than just physical movement and coordination. What started out as a drill in Kihon (Japanese for the basics), soon became a true test of mental toughness, physical exertion and the power of the group. Our group also demonstrated the classic Improv principle … Make each other look good! The scene is set …

Our Sempai started with a hundred-count for a basic set of alternating punches. Left mid-punch, right upper-punch and then right lower-punch – and all 3 punches done in under 2 second so it’s fast! After each punch, everyone says out loud “Kia!” So the pattern of Sempai’s counting and our Kia’s creates a rythmic and flowing pattern with the whole clas involved.

Sempai then invited each of us, starting with the highest belts, to seamlessly continue the counting (in Japanese) and punching for the rest of us to follow. So when Sempai got to 100, the next in line started back at “ich” (one), without missing a beat. Sounds easy … well it wasn’t. Here’s what I observed from the second row of the Dojo.

Our brown belt (let’s call him Woody) tripped at first hurdle the first time, then the next and over and over again. He just couldn’t continue the Sempai’s counting and timing of the punches. He became profusely apologetic to the rest of us as we all began to tire physically with the repetition of the task. By now we were over 1000 punches into the task, and as we fatigued, our Sempai became attuned to our faltering techniques. Even the Kihon pattern of punches required complete concentration and constant self correction.

There came a moment when, without prompting, sometime after Woody’s 10th failed attempt, that the group came to his aid. From the back rows our “Kia”‘s(!) became more in time, louder and more purposeful. As Sempai’s count of 100 approached, the collective group became focused on helping Woody, whilst at the same time focusing on our own techniques. Our loud and timely Kia’s created the best conditions for Woody to find the timing of his count. Without discussion, we all knew what was needed. Woody finally did it. When it came to the next in line, a green belt, he too faltered. But the group was in sync and it wasn’t long before he nailed it … and so it continued until we got through to the end.

Everyone was buzzing at the end of the class and not because of the physical achievement (although the repetition of Kihon was a great lesson in humility). I think it was the group effort in coming together to help the individual who was counting. That magical moment when we realized our collective voice (Kia!) had the power to pull an individual through tough times. For me, this is a living example of the improv principle known as … Make each other look good! Always!

Imagine if in our workplaces and communities, when struggling and failing publicly, we knew we could rely on those around us to support us and do everything in their power to make us ‘look good’?

I wonder when I can apply this next in life? When could you? 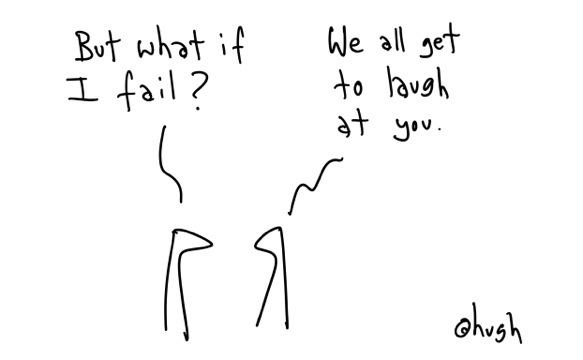