Beam Me Up Scotty!

Imagine a world where most people think that life’s events are largely predictable. A world where people believe that planning, expert analysis, centralized control and risk assessments will smooth out the bumps of unpredictability … and ensure that predetermined targets are hit. Sound familiar?

Now imagine a world where the universal human tendency is to ‘be prepared for the unexpected’ … because that’s life! In this world, planning is still done, but is balanced by the formation of improvisational teams – teams that emerge in response to what is happening in the moment.

In this world, the term ‘script think’ existed last century … simply because most people and moved on and understand the complexity of life! This universal human mindset creates the conditions (and permission) for experimentation, inefficiencies and duplication. In this world, mistakes are made often and are more common than the hits … but the hits can be exceptional and groundbreaking.

Creative organizations, communities and government agencies are everywhere and society is thriving. When people gather to talk about stuff that matters, they know how to listen to each other and they invite dissent into the room. People know that the best ideas emerge over time and come from diverse groups … and not from clever individuals.

When ideas emerge, groups are happy to act on them even if they are not fully understood. As a result, these groups value the surprising questions that come from inquiry and experimentation. In this world, conferences that discover new questions and problems are highly valued … even if consensus and a clear action plan doesn’t happen.

In this world, BIG, hairy and complex problems remain. The uncertainty of the future is as alive as the world that I write from. Despite the ‘seriousness’

So BEAM ME UP SCOTTY … to a world where improvisation and innovation reign. To a world where authors like Keith Sawyer are household names. Where books like Group Genius have been built upon by a generation of writers, academics and practitioners.

Oh, and by the way, at conferences we turn our lunches into a Social Object – HT to Nancy White for posting this gem of an idea. And here’s a description of TEDx Edmonton lunch …

“Lunch was next on the schedule and as with the rest of TEDxEdmonton it was anything but ordinary. Instead of individual lunches, groups of five or six people were given a wooden box filled with sandwiches, salads, drinks, and treats and were encouraged to eat together. Most groups ended up outside where the sun was shining and the streets were packed for the Edmonton Pride Parade. It was great to see discussions happening all over the place. Kudos to Elm Café andDuchess Bake Shop for the delicious food and the creative presentation!” 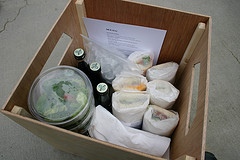