There’s a little ‘Werewolf’ in all of us!! 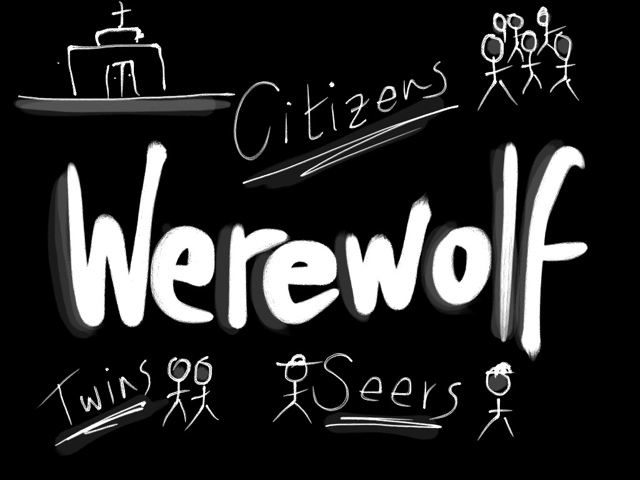 Monday night was dark, stormy and 20 people witnessed the demise of a 6th century village, gruesome attacks by 3 werewolves, public lynchings and arguments between friends. Everyone was looking out for themselves and trust had evaporated. At times it was tense … but mostly laughter pierced the cold night air.

Werewolf is just a game, but it’s so much more than a game … it immerses players in a world of experience. Playing Werewolf takes some to the edge of their comfort zone. Others revel in the uncertainty of a world that, in many ways, mimics real life.

Viv McWaters provides a snapshot of Werewolf here. Andrew Rixon provided me with his beautiful set of playing cards (illustrated by the wonderful Simon Kneebone). I had never hosted a game of Werewolf before and I admit to being slightly nervous, as the group settled into their armchairs with wine glass in hand. I was working with 20 people who had gathered for 2 days of learning. They had no idea what I had planned for the after dinner entertainment! 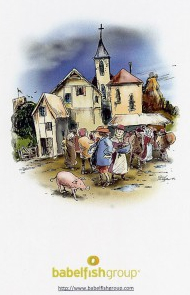 To give you an idea of the rules, here a nice summary from the net …

The villagers are trying to figure out who’s a werewolf; the werewolves are pretending to be villagers, and trying to throw suspicion on real villagers.

The seer is trying to throw suspicion on any werewolves he discovers, but without revealing himself to be the seer (because if he does, the werewolves will almost certainly kill him that night, since he’s the greatest threat to werewolf national security.) Of course the seer can reveal himself at any time, if he thinks it’s worthwhile to tell the other players what he’s learned. Also of course, a werewolf can claim to be the seer and “reveal” anything he wants.

As game host, there is so much to observe. Once I let go of my nerves, established a rhythm to the commentary and instructions, I settled into noticing-mode.

I am left wondering if being a Werewolf helps players to loosen up and relax more? They seemed to be paying much more attention to the dynamics of the game than the Seers and Citizens. Maybe being part of a known team makes all the difference (at night when everyone shuts their eyes, the werewolves, together, point out their next victim)? Not 1 of the 3 werewolves were voted out!

The Seers were desperately unlucky. One was flukily targeted by Werewolves on the first night and the other had 5 guesses before being lynched!

The villagers on the sidelines remained totally involved in watching the game. Some were laughing and others were ‘psycho-analyzing’ … trying to work it all out. Two people approached me after the game and said their mind was a lot clearer from the sidelines compared to during the game itself.

Some people found the whole experience stressful. One said that the concept of being “slaughtered” by Werewolves was quite confronting, even though it was just a game. Others said to me that they were surprised how much the experience ‘played with their mind’ and ‘sucked them in’. Like I said above, games are just games, but our mind is tricked into experiencing something far more real, where real emotions and physiological responses are evoked!

Games like Werewolf are not just metaphors for real life … they are ‘real life’. We play games in board rooms, in parliament during question time and when parenting our children. The sad thing is we often engage in life’s high-stakes games with our blinkers on. We fly along in auto pilot, taken over by our inner voice (which are just activities of the mind), noticing little of what is actually going on.

When we loose sight of our own mind, our emotions and bodies, we also lose the ability to connect with others and empathise. By being mindful (with an intention to be present) during games like Werewolf and improv games like Jibberish and 1 Word Story, we become aware of experience as it’s unfolding. Practicing these games increases our state of mindfulness. Through practice, the new neural firing patterns become stronger – ‘what fires together wires together’. Long term traits can then develop because you have altered the structure of the brain. (Source: Dr Dan Siegel’s Mindsight writings)

So next time you are working with a group, don’t be afraid to just ‘play games’! It reveals as much about our human nature as the rest of life.