‘Messing Around’ with Adam Hills

Saturday, March 27th was a huge day in Victoria. The F1 Grand Prix was on, the Melbourne Comedy Festival kicked off, Apollo Bay Music Festival and the global movement Earth Hour coincided.

It was also my 39th birthday which means I have one more thing in common with comedian, improviser and Spicks & Specks host Adam Hills … our age. Thanks to Adam Hills (and the audience at his Mess Around gig), my 39th birthday has been my most memorable so far.

Apart from our age, Adam Hills and I share something else in common … a belief.

Throughout his Mess Around gig, Adam repeated his belief that ‘normal’ people (you and me) are way more interesting than the celebrities we adore in the media. So, his shows are more about ‘us’ than him. He used the time to have a conversation with ‘us’ (the audience) and unearthed our stories – which ended being rich, diverse and funny. He connected audience members together and created a space to work together on something. After 2 or 3 of these shows, a social movement has been created around 1 man’s effort to raise money for a charity … all this momentum and action created from nothing but a story and a belief that everyone has can contribute. Most would say that their contribution is ‘ordinary’, but combined the ordinary can lead to something special. More on that story later. 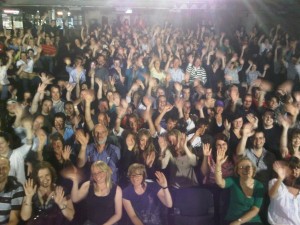 In my work with groups, I facilitate conversations between people. Some with small groups and some with large groups over a number of days. My belief is that the conversations and relationships between participants who attend workshops (or between delegates at conferences) are way more interesting than individual ‘keynote speakers’ or ‘panel members’ that we so often see on the conference circuit. Traditional conferences who worship ‘experts’ seem to have forgotten that we are a social species – where conversation and relationships are the foundation for any form of action. Even many of us (the non-experts) have fooled ourselves into the same ‘celebrity’ or ‘expert’ worship.

Viv McWaters has written about the same here … Johnnie Moore here … Chris Corrigan here … and I wrote about it here when describing the Aireys Inlet Open Mic Music Festival.

Back to Saturday night’s Mess Around …

If you want to follow the full story of the ‘movement’ that has emerged from Adam’s Mess Around in Melbourne, read his blog posts here. If you want a snapshot of the story in the form of a 1 minute sales pith to donate money, watch this video (and thanks to my wife Ingrid who put this together on her Mac) …

Adam Hills’ summary of the story so far …

But first, the story so far: I have decided that throughout this Festival I will do my best to make a mild-mannered IT Manager I found in my opening night’s audience as famous as possible. I want Chris Hughes to be more famous than Shiloh Jolie Pitt.

Chris only agreed to go through with it if we raised money for a charity that gives physical therapy to people with cystic fibrosis – The Simon Rhoden Foundation. At last count (bearing in mind it is only four days into the festival) we have raised over $2000. If we hit $20000 Chris will perform a strip in Federation Square on the final night of the Festival. Other audience members have offered lycra, a barbeque and to MC the strip.

There is now a viral video available at

and for higher quality

And you can join in the donations here http://www.simonrhodenfoundation.org/donate.asp 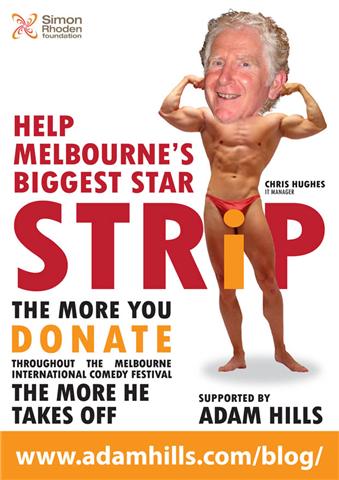 What we can learn from Adam Hills?

So how does one man generate so much commitment to action AND whilst everyone is having a riotously good time? Most clients I work with only dream of seeing so many ‘transactions’ emerge from a ‘workshop’ full of strangers. But would they employ a ‘mess around’ approach to run their workshops? Here’s Adam’s description of his Mess Around series …

“Adam loves ad-libbing with the crowd. So much so that this year he’s throwing the script out the window and devoting an hour-and-a-bit to simply messing around. No script, no plan, no idea. Literally anything could happen – and if you’ve been to a Hilsy show before, you know it probably will. NO TWO SHOWS THE SAME!” Melbourne Comedy Festival website

And reference statements include …

“His interaction witht he audience proved so fruitful that they were reluctant to release him back on to the stage. 5*” The Scotsman

“An Adam Hills show is always a festival highlight … with real weight, wit and purpose behind his contagious positivity.” Chortle (UK)

Would you employ this ‘Mess Around’ approach to an upcoming workshop where you want agreed and sustainable actions and outcomes?

Ok, so I hear you saying that the context of your workshop if totally different …  I understand that – people are doing ‘serious’ work and your workshop is not a performance. You are right, many things change when we shift from a Comedy Festival gig to a workshop where the stakes are high. However, many things also remain the same – people are people and relationships are still the glue that connect us into sustainable action. Here’s what I think we can learn from Adam’s Mess Around approach.

As I have already said, everyone has a story to tell. In a complex world, we need more connections between people, more spaces for more conversations and less listening to experts (we still need some of this like at TED). We need to harvest stories from our employees and conference delegates and learn from them.
We need less scripts and way less plans and time spent doing strategies. Instead, we need to get ourselves ‘prepared’ for dealing with the unexpected and uncertainty. (Viv gives a real example of being prepared here).

Weik and Sutcliffe in their book ‘Managing the Unexpected‘ also highlight some characteristics of High Reliability Organisations (organisations that have a track record of remaining resilient when the unexpected happens) For me, these characteristics share a remarkable resemblance to the principles of Improvisational Theatre and the approach Adam takes to ‘messing around’.

Wanna Save the World?

If you want to ‘save the world’, you can read about how Improv can be used to help at the Applied Improvisation Network site. Belina posted this very question and many responses have come through so far. Read about it here.

From where I sit, 1 thing is clear. Conversations and relationships between people and groups are the platform for collective action. Complex issues like ”adapting to climate change” are messy and complex. They are unpredictable and context specific. As a community/society we need news ways of working and being together. We need to ‘let go’ of control and learn to be more comfortable in the ‘mess’. I believe that applying Improv, and the ‘Adam Hills’ approach, is one way of getting more traction.