Posted by  admin —May 15, 2009
Filed in Being Present, Facilitation, Yes!And Improv

What’s Tiger Woods’ win at the 2008 US Open got to with high performance under stress? Allow me to share a quick story first …

Recently I facilitated a workshop when in the onset phase of ‘Gastro’. As participants arrived I suffered from weakness, nausea and waves of stomach cramps. If I was at home, I would have curled into bed, shut the door and placed a bucket by my side.

I disclosed my discomfort to my client and we decided to press on … 50 people had given up their evening to contribute critical thinking. The stakes were high.

Despite my own discomfort and pain, the workshop (by the account of the closing comments) was a big success. I was also surprised by my own performance and I learned (or re learned) something that I will try to hang onto to. Here it is …

My illness forced me, as an extrovert, to become introverted … quieter and less ‘notice-able’ than I usually am when playing the role of facilitator. In fact, I often slipped into the background and became almost invisible to the group and allowed the process to run it’s course. Chris Corrigan writes beautifully about The Art of Holding Space … in this case I was force to hold space in a different way to my default style. I was more effective than usual and by saying and doing less I ‘noticed’ more about what the group needed … I was then able to respond and support the group more effectively.

A Sporting Metaphor – Doing More With Less
I usually dislike sporting metaphors but this one has relevance. 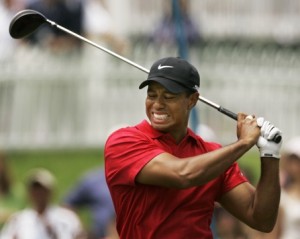 Golfing fans will remember Tiger Woods stunning victory at the 2008 US Open, despite being hampered by an injured knee (which need a full reconstruction soon after). Tiger admitted later that his injury really helped him to focus more on ‘every shot’ he played. His swing has limited and this forced him to improvise and ‘do less’ … shortened his backswing which brought him more control and accuracy around a very tight layout.

My own golfing ‘turning point’ moment came when I had an injured shoulder when 16 years old. This shoulder injury forced me to shorten my swing which in turn force me to keep my head still. As a result my golf improved and the simpler, more compact swing became a permanent feature of my game.

In Sum …
Forced constraints (such as time, illness/injury) often lead to improvisation where we have ‘Do More with Less’ … look out for the big lessons that can be learned during these times.

Pain and suffering helps us to ‘let-go’ of outcomes and our own ‘expectations’ of high performance … and in my case this week … notice more about what is going on around me.

Note: You should also read this book by Robert Poynton