Accepting Offers in Action: Playful analysis of myself on video

I am reading Robert Poynton‘s book Everything’s An Offer (How to do more with less) and some things happened on the weekend that I have to write about.

By the way, even though this post refers to Improvisational Theatre … people working in the traditional domains of leadership, teamwork, strategy and business can learn a lot from Rob’s book (and this post). 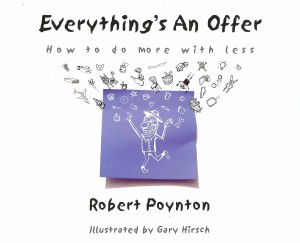 Part 2 of Rob’s book is titled ‘Let go, Notice More, Use Everything’ – which is also the heart of Improvisational Practice. I have some video of myself and 2 other musicians literally ‘improvising’ at the Aireys Inlet Open Mic Festival which happened 2 days ago … let’s apply some of Rob’s ideas to some real-time action … a performance where the pressure was on and the musicians were willing to just ‘show-up’ without a plan!

What follows is a series of super-quick video clips … quotes from Rob … then a paragraph of reflection about what ‘I notice’ is happening here. I’d be interested to hear about what you notice too. By the way … I went into this 30 minute set and the MC role I had for the entire day with Rob’s advice to ‘Accept everything as an Offer”

Story 1: Recovering from a Shaky and Unpredictable Start

“To an improviser an offer is anything and everything you can take and use to further the story” Rob Poynton. EaO. page56.

“When something awkward occurs you can productively reframe it as an offer” Rob Poynton. EaO. page 60.

“When panic sets in this thought (of using what you have) can keep you centred. It gives your mind somewhere to go other than into a spin. All you have to do is ask ‘What can I do with this?’ and immediately you have something constructive to do.” Rob Poynton. EaO. page 63.

When Dazza started playing harmonica, we produced a surge of dreaded feedback through the front speaker. The crowd winced in pain, I stopped playing and thought to myself ‘Holy Shit! I have to manage this’ … BUT … Clayton (on drums) was nearest the mixer and quickly sorted it out.

A few years ago, I probably wouldn’t have recovered from an event like this on stage. Having the mantra ‘accept everything as an offer’ really did help me to reframe and feel comfortable, despite the discomfort of the situation. Letting-go of a disruption like this when ‘on stage’ is really hard … and I struggled for more than a few moments.

“A well known military maxim says that ‘no plan survives the first contact with the enemy’. Generals (like business leaders or MC’s at music festivals) and their strategic planners know that no commander, however powerful, can see everything coming.” Rob Poynton. EaO.

I had a ‘back-up’ plan in place which was … ‘if I forget the lyrics, I’ll have them written in front of me on a music stand’ … and … ‘if it’s windy I’ll have a peg to hold the page in place’. Well, like most plans they fail in the heat of battle. The wind gusts blew the pegs off anyway and I was left to remember the words.

“Playfulness is at the heart of this work and if you take what I say too seriously, you are less likely to play around with it and arrive at something new”. Rob Poynton. EaO. page 48.

You probably also noticed how the lyrics consumed much of my attention and by fumbling around the flow of the performance was affected. At least I could laugh at myself along the way … being playful as you stumble and fumble at least keeps the audience from ‘feeling your pain’. (In organisations where mistakes are not celebrated, the fear failure becomes a cultural norm and innovation, new ideas and creativity are stifled.)

When I realised I was on my own and I accepted the futility of the lyric sheets, something happened. I became much more aware of the beat of the music … I began to notice what the others were playing and notice and respond to the crowd. By letting-go and trusting my own instincts, I started to play with more feel and timing. I have always played by ear and the effort to read lyrics, sing and play guitar at the same time was unnatural for me anyway.

I made a few observations in this clip …

1. I had no plan about how to introduce each song. In this case I just worked with what I had … the name of the the cover song, the artists and our names and scrambled them together. I think it worked out ok.

2. The fact the we had done very little rehearsal meant that we had to really sharpen our awareness of what each other was doing and playing … so a potential negative worked in our favour. (By simply noticing and paying more attention to what others in your workplace are doing/saying is one of the best ways to improve teamwork and collaboration.)

“You (the improviser) listens to your colleagues, to the audience, to any sounds in the theatre. From moment to moment, from one show to the next, an improviser has to practice listening constantly”. Rob Poynton. EaO.

3. 1 person offered us a clap in beat with the song … I accepted that and invited more to join in. By midway through the song all 50+ people were participating and clapping along! Imagine if I’d blocked the offer and instructed “No clapping please!”. Worse still, I might NOT have noticed 1 person in the crowd clapping in the first place! (So often, organizations block offers like this with out dated protocols and in an attempt to control behaviour and employees)

More observations & quotes to learn from …

“They (improvisers) are quite accustomed to working at the very limit – in real time (and with their customer watching).” Rob Poynton. EaO.

1. Despite wearing his “L Plates”, our drummer (a great guitarist and singer) is learning his craft in front of the crowd. By keeping it simple and doing ‘one less thing’, he brings a whole new dimension to the performance.

“On stage it is vital that improvisers accept offers … It is by accepting offers that they join one idea to another and create flow in their story. If they block offers, the cut flow (or prevent it from occuring) and disconnect ideas and people.” Rob Poynton. EaO.

2. The birthday announcement was known in advance and the obligatory rendition of Happy Birthday was always going to happen. BUT … I put myself on-the-spot and invited the crowd to improvise with a 12-bar-blues version of Happy Birthday … then … I blocked my own offer!!!! I remember my thoughts … “How are you going to pull this off? What if this doesn’t work?” I asked myself. A classic case of ‘fearing failure’ and ‘playing it safe’ at the end of an otherwise really fun and improvised gig.

I have probably done way too much thinking here, however, the process of self analysis by video has helped me to better understand Improv principles and how they play out in the real world.