Posted by  admin —May 4, 2008
Filed in Just observations, Uncategorized

In Byron Bay, there is much to do. Heading out for a morning run and taking photos of things that catch my eye is one thing I’ll be doing regularly … and will be the one thing that I write about here over the next 3 weeks. 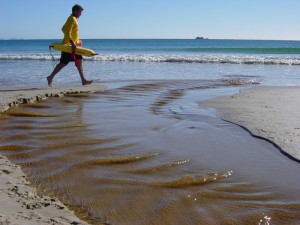 Surf Life Saving is an Australian tradition. For generations, our surf clubs from east to west have enjoyed massive volunteer support. Like all volunteer-based movements, resources are often hard to find. “Resourcefulness” is a common trait in movements that live-on.

In Byron this morning the surf boats, bronzed bodies and yellow & red uniforms were on full display. Thousands of people had travelled from all to take part in an annual swim. Swimmers represented surf clubs from all over New South Wales and Queensland. There were as many kids (aka “nippers”) as there were parents as there were grandparents.

The one thing I noticed on everyone’s face … a smile. Everyone was having FUN! Maybe that’s another secret to Surf Life Saving success?

Time for a cup of tea … then bed with the surf crashing on the sand only metres away from our tent.